Do You Know? is a popular CBeebies programme hosted by the energetic and Bafta winning host Maddie Moate. 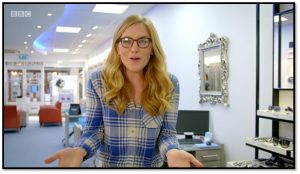 Aimed at 3-6 year olds the show explores how everyday objects are made and work. Dans kids, Bert & Fred, particularly like the fire engine hose and dishwasher episodes.

The Do You Know? team had been looking for an opticians to help them film an episode about Eye Examinations and Spectacles. In April last year the producer visited Perspective for his routine eye test and liked the experience so much that he got his team to contact us the very next week. 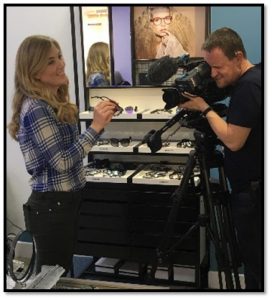 The day of the shoot was a fascinating 8 hours. The practice was closed and we were all a little nervous, especially me as I was going to be on film, doing Maddie’s eye examination.

The experience was quite different to the Seiko filming with John Craven, instead of one person filming there was a director, camera and sound man, production assistant and of course the star of the show Maddie.

The whole team was brilliant and amazingly focused. You would not believe the time it takes to create even a few minutes of footage. The professionalism and attention to detail that is required was incredible to witness and left me with a new respect for the people who create the high quality television programmes we enjoy in the UK.

Any children or grand children will be relieved to know that Maddie is really that lovely! She has a genuine interest in the subjects she covers and the people behind them. She even made the effort to face time Bert & Fred after the filming had finished…..star struck was not the word!

Bertie couldn’t believe I was going to be on TV with Maddie, and wasted no time telling all his classmates. I got a bit of a shock when all the mums kept asking at the school drop off about my alleged “staring role”. I started to worry about the critique I may receive, as I suspect there is nothing harsher than the mum of an unhappy Do You Know? fan.

We had to wait so long we had almost forgotten about Perspective being on national TV! However, as our enthusiastic Facebook posts announced, the Big CBeebies Premier was finally scheduled for 4.30 on the 9th of April 2018.

Normally a Monday afternoon at 4.30 would be fairly quiet. Typically we suddenly had a deluge of people coming through the door. Obviously they were unaware that we were waiting for our first glimpse of Perspective’s broadcast to the nation. To see us all crowded round the television was most puzzling.

However, Bertie and Freddie were more than happy to let them know  “Our Dad is going to be on TV!!!!!!!”

The episode is brilliant and explains about a visit to the opticians perfectly. You hopefully can still catch it on BBC iPlayer, in the CBeebies section, if you search for Do You Know Series 2 Episode 5. It tends to get repeated so keep your nice clean specs at the ready. John Craven is a well-known Television presenter and journalist; and is also an ambassador for SEIKO lenses. As part of his role with SEIKO he takes part in films promoting the importance of eyecare and the benefits of good eyewear. Perspective Opticians was chosen as the location for his latest video; this was a great experience for all of the team, in particular for Dan Sanders who had to do Mr Cravens eye examination and do some on camera work himself. Dan said

“We were all very excited and slightly nervous about what was going to happen that day. John was very friendly and his vast experience made the whole process very easy for all of us. It was a great honour for us to be chosen to work with him, and we are all looking forward to seeing John on TV in the glasses we have made for him; and on any future projects he and SEIKO may have in the pipeline for us”

As we provide healthcare, we will continue to wear face coverings, sanitise and follow social distancing advice. Thank you for your continued support and kindness towards our team!

For your safety and comfort, we are still seeing clients by pre-booked appointment.

BUT….if the door is locked please give us a wave or ring the bell and someone will be right with you to see how we can help.

We are currently open Monday to Saturday from 9.30 am to 5 pm.

Despite restrictions relaxing we don’t want to get caught out whilst infection rates remain so high. Please help us keep everyone safe by……

Booking appointments to visit us, wearing a face mask when requested, and sanitising your hands on arrival.

As we still have reduced numbers of appointments available, we are trying to help those who feel they need a change in prescription or require new glasses or sunglasses. Obviously please call us if you have any concerns about your vision, or the health of your eyes.

Routine examinations, where you feel everything is fine and it is unlikely your glasses need updating, can be helpfully postponed until COVID 19 levels are much lower.

Please call 0121 709 1000 or email info@perspectiveopticians.co.uk to book your appointment.